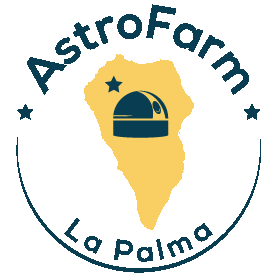 Early in 2015 Ovidiu had a dream to settle one small private observatory in La Palma, being mesmerized by the beauty and tranquility of the island. During next years he searched for some land in Puntagorda and Garafia located on the W-NW side of the island, but none of them met expectations.

In May 2020 a 8500 sq.m property became available in Catela, a very small and isolated village of the Garafia municipality, located around 1200m altitude in a spot very easily accessible from the LP-1 road (km 67) which offers very dark skies in a natural beauty scenery surrounded by Canarian pines, chirping birds (listen to the recording) and unforgetable sunsets over the Atlantic Ocean. 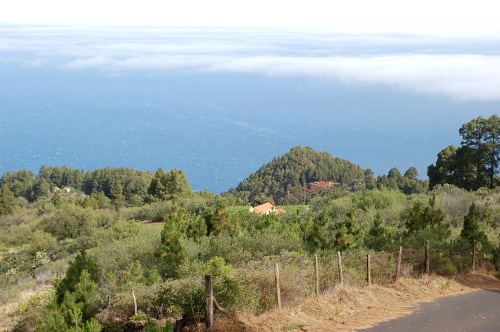 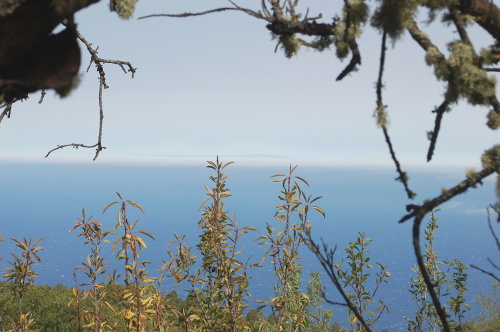 On the basis of 5 years of team work and collaboration for the Isaac Newton Group professional observatory, Ovidiu convinced his work colleague, Richard, to join this venture. The planets aligned well, and they became partners, creating the AstroFarm La Palma company, registered in Spain in July 2020, which then acquired the land in Oct 2020.

Based on our professional experience from 2009 in La Palma, and knowing many other large professional observatories around the globe (Chile, Hawaii, Mexico, South Africa, Europe), the higher W-NW area of La Palma offers the best conditions, specifically clear weather, while minimizing the risk of precipitation, light pollution and the volcanic hazards on the SW side.

Located between 1150-1200m altitude, the AstroFarm observatory will be above the first inversion layer (600-800m altitude) which means clear skies for almost two thirds of the year and very good seeing, probably around 1 arcsec, (both to be monitored soon). Actually, this ∼1200m limit represents the highest altitude where such a private observatory can be legally built in La Palma, being surpassed only by the National Park which does not allow any private buildings. 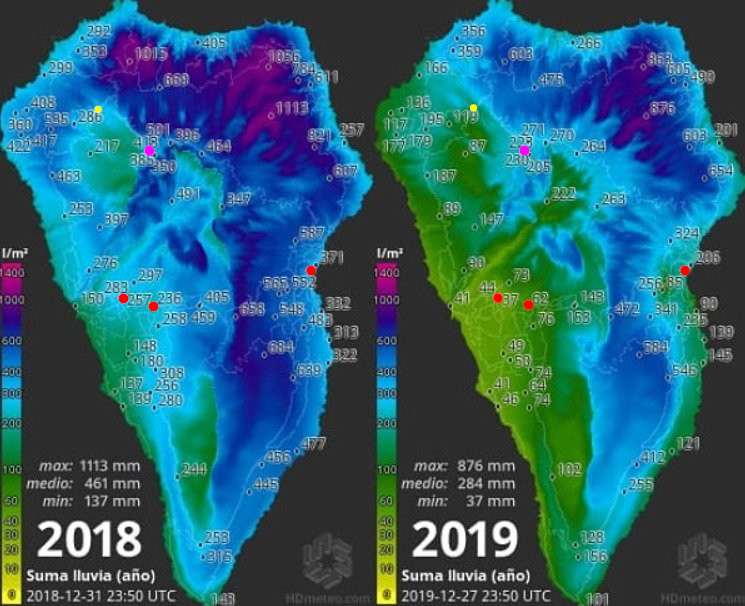 The above map shows yearly accumulated rainfall (litres/m2) in La Palma during years 2018 and 2019. It verifies the very low precipitation at AstroFarm location, about 1.6 and respectively 2.4 times less than the island average. Our site is marked by a yellow circle (in the upper left green drier W-NW region), being protected by the mountains about 15 km away of the largest light polluting cities of Llanos de Aridane and El Paso (the two left red circles, total population 28000) and 20 km of the capital Santa Cruz de La Palma (right red circle, population 17000). Maps courtesy of HD Meteo and El Time. 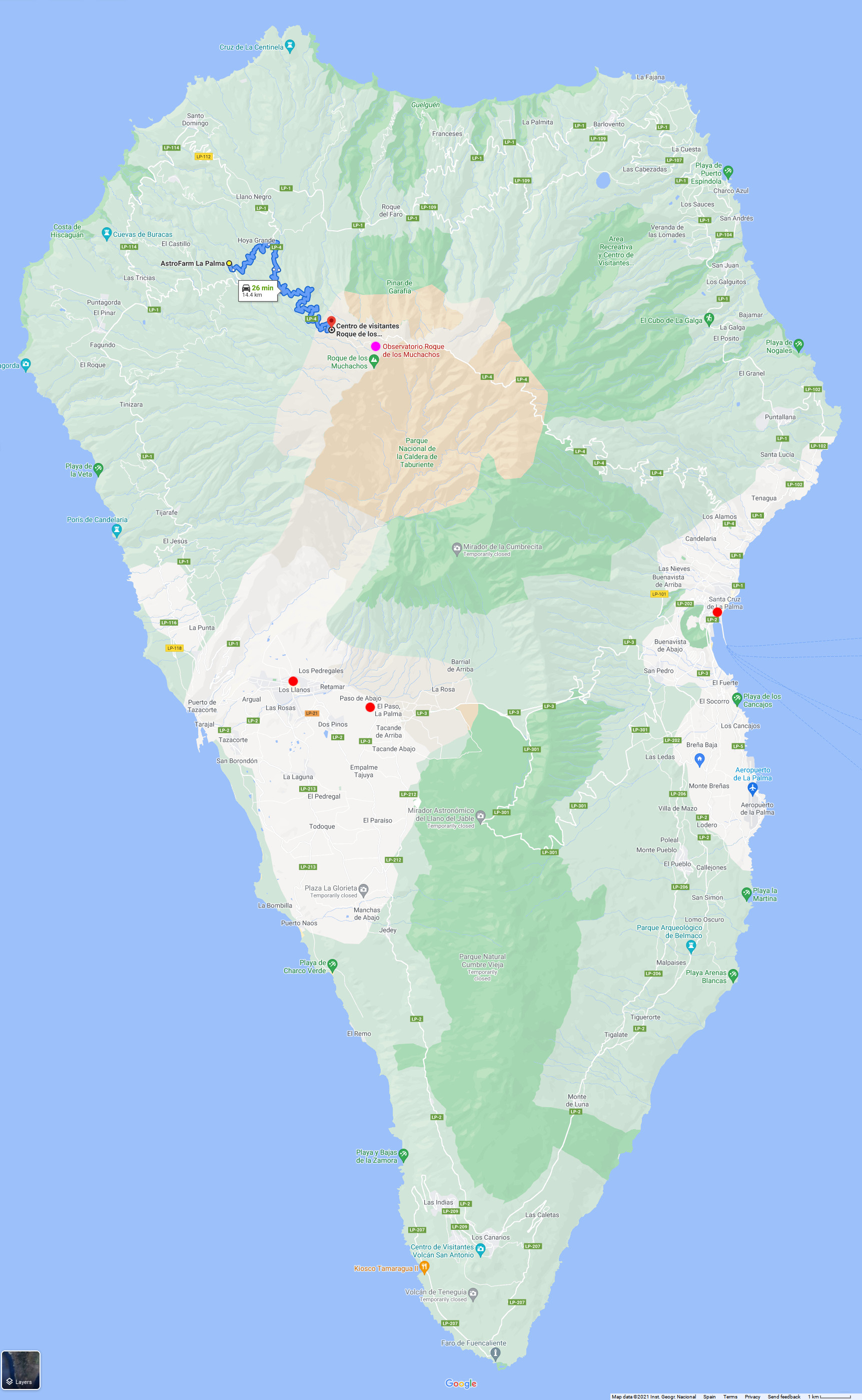 Another advantage of our location is the proximity of the peaks of La Palma and the Roque de los Muchachos (ORM) observatory. During wet winter nights when AstroFarm might be cloudy, the new Centro de Visitantes located just beside ORM (altitude 2070m) could be clear, being only 14 km (25 minutes) away from AstroFarm (above map). ORM visiting centre picture courtesy of LaPalma1.net.

Thanks to its secluded location and the sky protection law, AstroFarm offers extremely dark skies. The left picture was taken with a cellphone by PhD student Viktoria Pinter, and the right one was taken with a Nikon DSLR by Ovidiu. Both 30s shots were made on 27 May 2020 at the start of the night, towards the SSE, showing the head of the Scorpius constellation and the rising Milky Way. The small stony shack was iluminated by red headlamp and is part of a vineyard owned by a neighbour (there are several of vineyards in this region), bordering our NW corner. 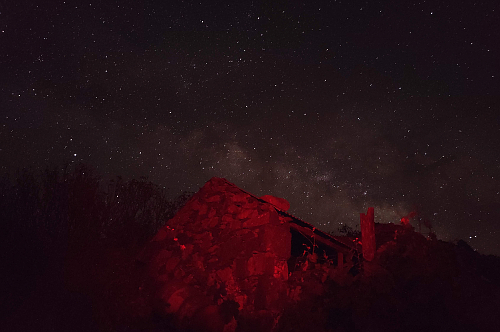 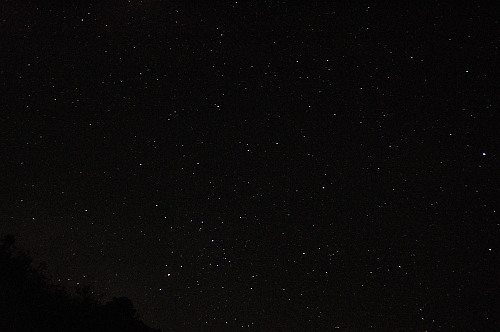